+ Optimized the map a bit, should run a little smoother.
+ Fixed bug near axon base where a force directional volume was blocking hitscan weapons.
+ Fixed several areas that allowed you to exit a vehicle and quickly scale a blocking volume by pressing jump. Whoever does that now will be greeted with death. Also, in general, players will not be able to get past a certain elevation.
+ Fixed bug where if you hit a rock moving on hoverboard and jumped, you would be flung several hundred feet in air.
+ Adjusted several rock static meshes that had exposed edges, so you could see underneath the rock. This has been fixed.
+ Fixed bug where if you jumped to a certain point towards the top of a base with a scavenger, you would be stuck and unable to exit the vehicle. The only way out would be to /command prompt suicide. This has been fixed.
+ Fixed out-of-map bug on axon side kneepads. It has been changed so if you drop down to that area, you will die.
+ Fixed bug near axon base where you were able to jump outside the game area via walldodge+hammer jump.

+ Kneepads have been replaced with Chest Armor.
+ The Chest Armor has been replaced with a Shield Belt.
+ New Player Starts have been added down near the dragon-platform area (with nearby weapon rack) to help counter spawn-killing in the spawn rooms, and to help balance flag runs so a flag runner is not always directly greeted by people he has just killed. Also in each base one Player Start has been added completely outside, near the stinger.
+ All jump pads have been given air control.
+ Each base now has one avril ammo piece, under the lion fountain.
+ One Deployable EMP has been added in the middle of the map, deep in the water under the water mill.
+ The blocking volumes covering the sniper areas in both bases have been removed, so it is now possible to get up/around those nooks and crannies with manta/scavenger/etc.
+ Jump Boots have been added, and are placed in the middle of the small bridge in the center of the map.
+ Previously, players could access an area behind the oriental wall in the middle of the map (near redeemer, facing the skyline.) the axon side would be able to get up easily via double jump, while the necris side had to either hammer jump or perform a difficult board-jump. This has been fixed by giving the necris side a small stepping stone.
+ To help counter excessive necris camping of the axon longbow avril area with the nemesis and darkwalker, a rock similar to the one the nemesis is able to hide behind at the blue base has been added to the red base.
+ The necris stinger area has been adjusted, so it mirrors axon proportions and is the same distance from the spawn rooms as the axon stinger is.

+ In front of each base (lower part, near goliath or walker) There is an entrance to a tunnel that leads to the back of the base to the dragon-platform area. The axon tunnel has an earthy feel to it while the necris tunnel has a more dank feel. I put the tunnels in to give flag runners an extra option when either "infiltrating" the enemy base or leaving with the flag. I feel that the tunnels, + the jump boots, give skilled runners the tools they need cap flags. 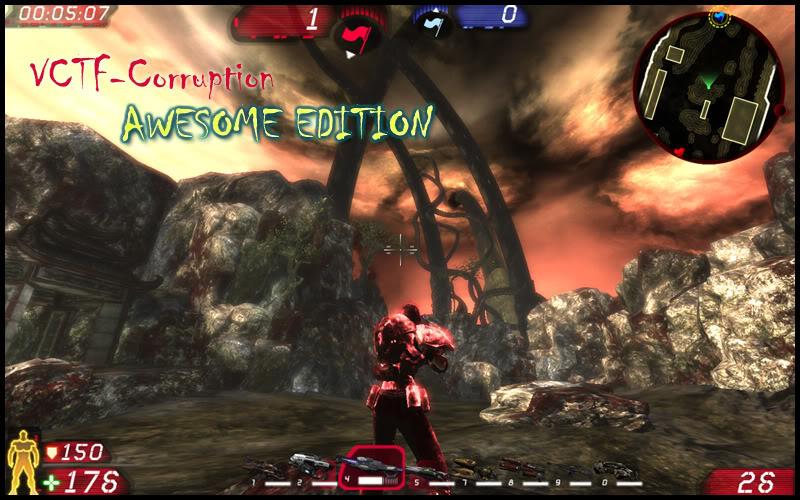